I have known you for about two thirds of my life and I guess a greater share of yours.

I knew you as a kid, literally.

You were this over enthusiastic, machine gun mouthed student of mine in the ComArts classes in De la Salle University.

You were restless.  You were unstoppable.  You were endlessly excited because for you every possibility is an opportunity to learn.  And you never held back in your drive to get ahead and do exactly what you wanted ... the way you wanted it.

I remember that I tagged you along the opening night of a play I translated into Pilipino.

It was Carlo Goldoni's Mirandolina, directed by Tony Espejo.  You wanted to witness the premiere of a play and so I dragged you along. I remember how wide-eyed you were,  this kid gaping at the costumes of Badong Bernal and how you joined us in the post-premiere dinner, carrying on a conversation with theater artists that not a regular eighteen or nineteen year old could hold. You were glib and sure of yourself in your endless questions.  I was amused.

You were always a notch above the rest of your peers --- something that happens not very often when a teacher  spots someone in the class who will be somebody by sheer promise and presence. You can sense that he will be one of those who will achieve prominence far exceeding the accomplishments of his teachers.

That was why I was not surprised when you blossomed into this ... celebrity photographer whose name became as famous as the images you created.

You became a brand.

In the 80s and the 90s, you rose to that stature not only because of the beautiful pictures you took but because you were always a joy to work with, always a joy to behold.

The room  used to light up whenever you were around.  You had a way of announcing your presence to make it known that this space would be your territory.

You made hard work look like fun. You made people more than just comfortable but opened them up, played them on the palm of your hand until your eye captured the very image you wanted to immortalize  into all of time and audiences to see.

You were gifted not only with the talent for manipulation of the split second of light in images: you were blessed with the ability to connect with people ... and to truly know and appreciate them, affirm their worth and make them feel like they were part of your life of learning.

There were numerous times I  worked with you for various projects.

I remember the Star Cinema pictorials we did for the promotion materials needed way back when I was still working for that company.

I precisely remember that time in your studio when we were doing the poster and promo pics for Kasal Kasali Kasalo,   It was more of a get together of friends since you were also comfortable and personally close to the Agoncillos, You were and will always be loved by so many entertainment luminaries.

And remember  that time you had me take off my shirt during my balingkinitan and borta phase --- telling me that I should have a memory of the moment when I got myself that fit and I had the privilege of a pronounced chest and waistline at the age mid-50s.  I remember that. You said that in later years I can always refer to those photos to see how once upon a time I looked that good.  I remember that, Raymund,

Or when we sat together in the same panel with Mr. C. and Annabelle Rama for that talent search show in the relaunched TV5.

Oh, those were such crazy days as we spent so much time in the studio as well as that trip to Cebu when we had to meet the kids auditioning and scheduled for screening.  It was a laugh-a-minute.

Being with you was never work, Raymund.  It was always about the fun. The fun in being together because of work.

We both agreed on that: work ceases to be just work when you have fun doing what you always wanted to do.  And that was the way you lived your life.  You always had a sense of humor. And a love for life and people.

It is only now that I realized that our most treasured moments were the times we saw each other in Boracay for stretches of holidays for Easter and Christmas.

If I did not go with friends, I would spend an entire week alone in what used to be my Happy Place. We would find each other in Station 2 where you and your entire family were billeted for the holidays together.

I will never forget how you would invite me for those late afternoon beer and fish cracker soirees when we talked about almost everything and everybody, trying to out-"bitch" each other while swapping stories about common friends and incidental characters in our jobs and personal lives. Or  remember the dinners by the beach with your beautiful family: your brother JR and mother who was such a kind and gentle lady, embraced by the scent of delicate perfume all the time, so sweet and accomodating, treating me like I were family. Or your nephews and nieces who you showed such care and fondness.

Then later in the evening we would all proceed to the usual digs where gulps of Jose Cuervo or glasses of Mojitos remind us to forget whatever it was we left in the city.  You would be laughing hysterically watching me, nearing senior age then --- fuelled by tequila and having the guts to dance with people half my age,  The laughter, Isaac, the laughter.

Those were the days, Raymund.  And the nights.  How could I recollect those sounds and images without the timber of your voice or that trademark giggle that was more of a holler? How can I forget how you would throw your head back and howl what was your version of guffaw?

Just now I remember our conversations while we were trapped during the pandemic.

It took some time for me to agree to be interviewed in your livestream project as I jokingly branded you as The Pandemic Tito Boy.  We spent more than an hour talking about how we were coping during the first forty days of the lockdown.

Then we had all those video calls and endless conversations in Facebook Messenger discussing everything from the fate of show business as a consequence of this hideous virus ---- to the generational differences between the new photographers and those of your time and age.   Suddenly we were discussing how it was with my generation, then yours ... and then how it is now.

That was when we realized we were talking like old men.

When you made it known that you were going to be confined in a hospital in San Francisco because you tested positive with the virus, I was stunned.

All I gathered was that you were in the United States for some r and r with Jayson.

I did not even know that you and your long time partner had plans of finally tying the knot ... something I had already expected to happen sooner or later.  There were only those photos of you in Las Vegas popping out of my timeline.  I thought you were having your usual dosage of vacation fun.

I do not even want to think of what you went through, Raymund ... because someone as beautiful as you did not deserve that.

Nobody deserves what you went through ... and now in my moment of grief, I ask whoever, whatever, wherever why is it that someone like you should go through that whereas I can give the universe an entire checklist of creatures who should pay up for all the wrongdoings they have done to people, to the country, to life. I guess I will never get an answer to that question.

We wanted you so badly to rise from that hospital bed and march out of that sick enclosure to join us back in the real world where you do not only belong ... but where you are so badly needed.

Last night we did not want to believe.

I did not want to believe all the whispered and tearful news spreading in social media until I heard it from Jayson or anyone from  your family to tell us that you have left.

And even after it was finally confirmed, I still did not want to believe.

The story could not end this way. But it did.  This is not the narrative we wanted.

I joined the crowd out there, stunned into silence not only because of grief but  in pure shock.

We cannot imagine how we can resume life the way we knew it without you among us.

I know you are up there smiling at us ... now realizing how many you left behind love you fiercely.  I guess it is but time that we let you go and give you that much deserved standing ovation not only for a life well-lived but for showing us the humanity in being.

Raymund, I was proud of you as my student.  But I am prouder of you as a friend and example of how life should be led with enthusiasm, kindness and love.

I join so many others to say goodbye and say that you have only left us physically but will always remain where it matters the most --- in our hearts.

In case I never had the chance to tell you when you were still physically around, in this letter I will say what I should have said before: I love you, my friend.  You are a blessing to all whose lives you have touched. 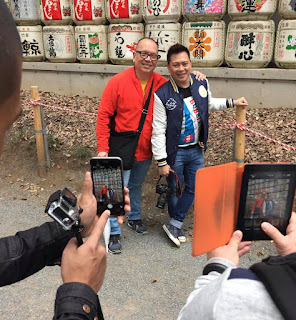